Version 0.7.0 for Simple Markdown brings some major changes to the app. Most notably, and likely most requested, is DARK MODE. With Android Q's built-in implementation coming soon, I figured it's about time to finally get to it. It's something that's been on the roadmap for a while but now it's finally complete.

With the dark mode rollout, I figured a redesign would be appropriate as well. I've been thinking about moving the app bar to the bottom of the screen for a while now, especially since devices keep getting taller and taller. I played around with the idea a bit and eventually settled on a design that I liked. I hope that you all like it as well.

Finally, there were numerous other changes that had to be made in order to accommodate Android Q. Namely, scoped storage. Since I wouldn't have direct access to the file system anymore, the old file explorer had to go. It was kind of buggy and didn't always work the way I had hoped so I opted to just use the system file explorer instead. I'm hoping this won't cause any major issues for anyone, but please let me know if something isn't working anymore. One advantage of this move howver is that you can now save to or open from your cloud file providers directly, without having to manually move the files around. So I suppose it's not all bad.

The file system access required me to rework the autosave feature as well. Since I would no longer have access to just directly write the file back to the device, I now just save it locally and when you attempt to create a new file, I'll prompt you to save or discard your changes.

Lastly, the default root directory option has been removed, since I no longer have control over the file system. I'm hoping this wasn't a highly used feature but I don't really have any analytics to tell me so I might have to change that in order to avoid pulling out potentially highly used features.

To wrap things up, I've attached a few screenshots to the bottom of this post. Please don't hesitate to reach out if you have any feedback or would like to contribute! 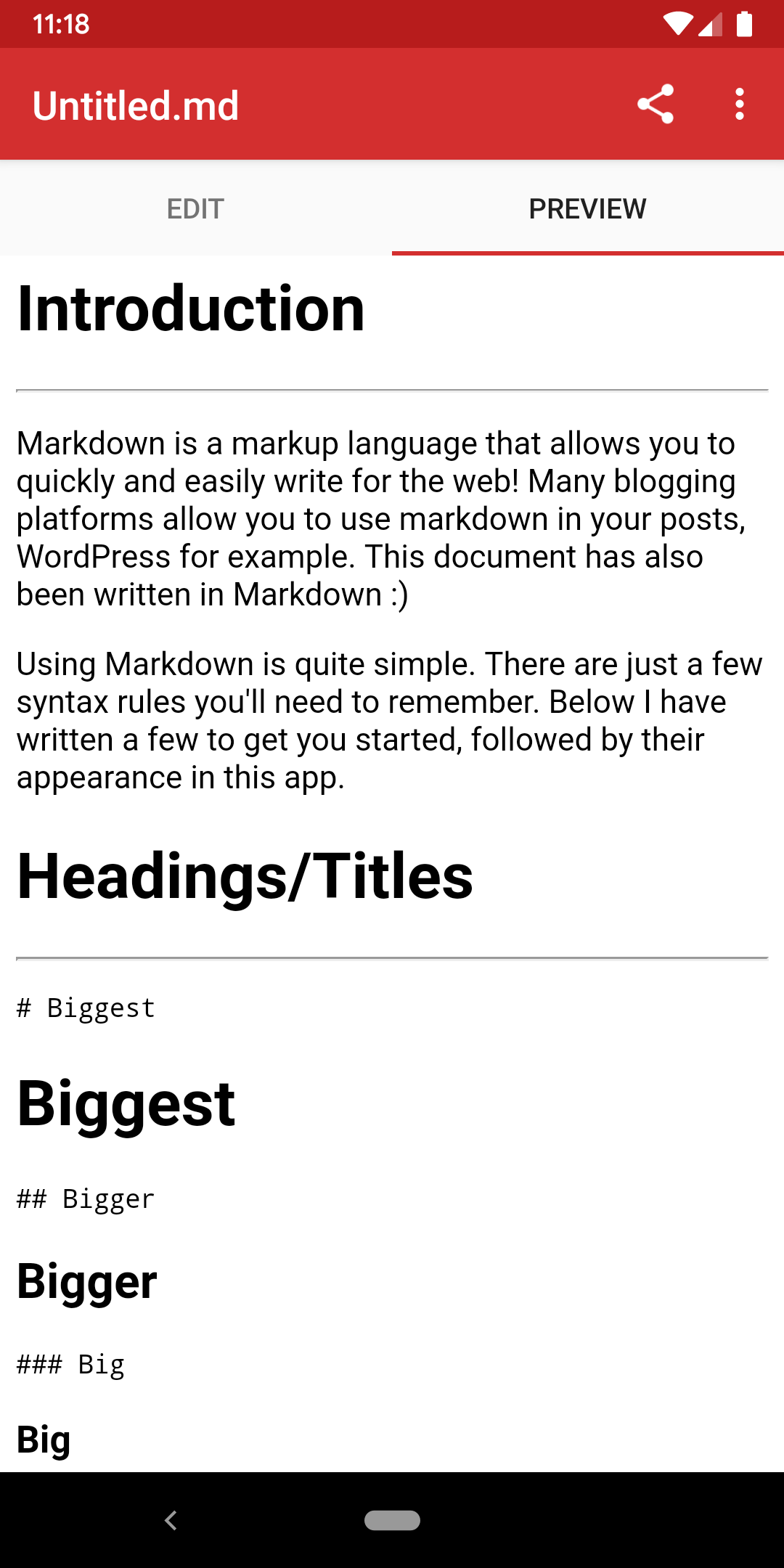 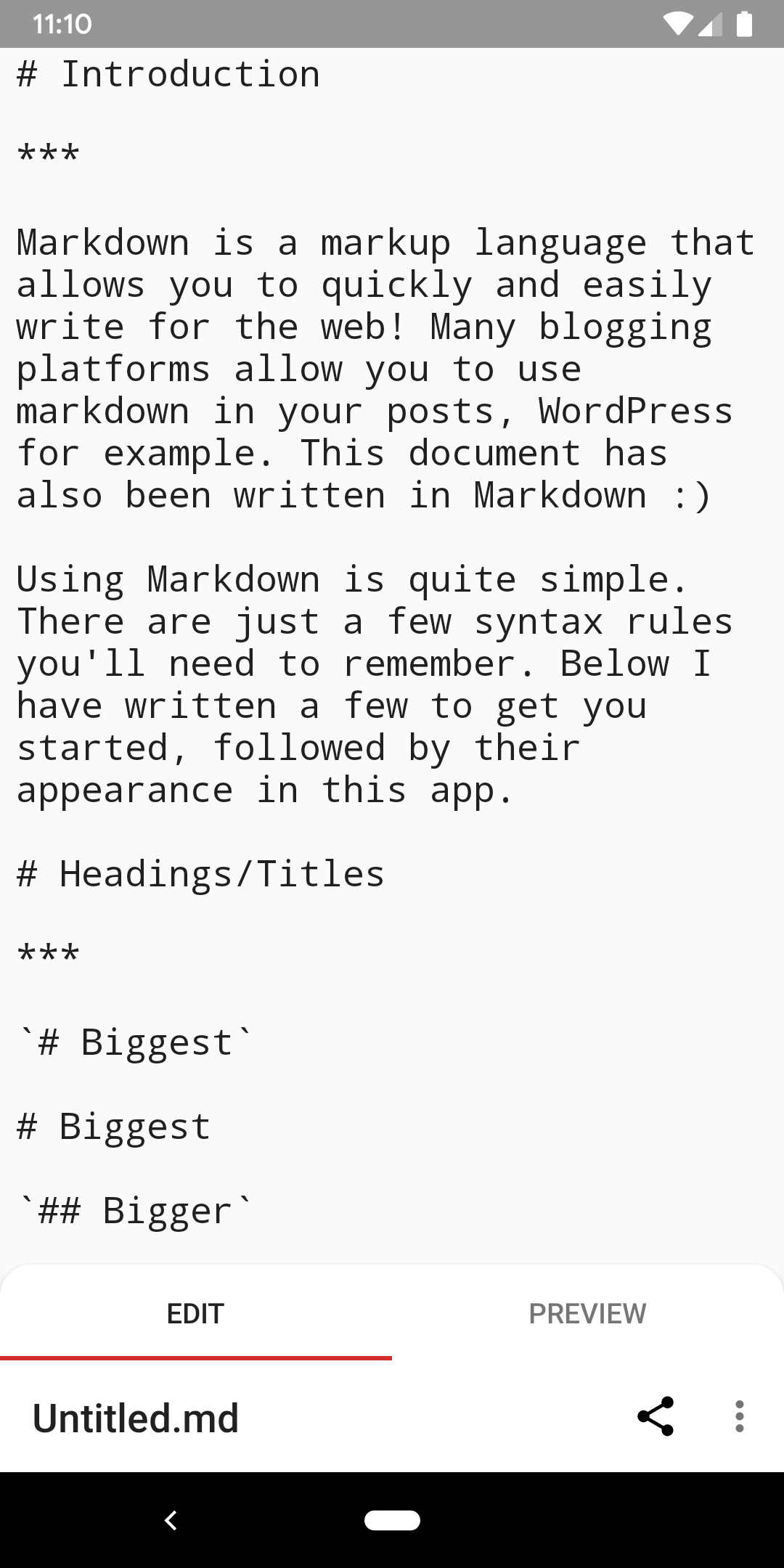 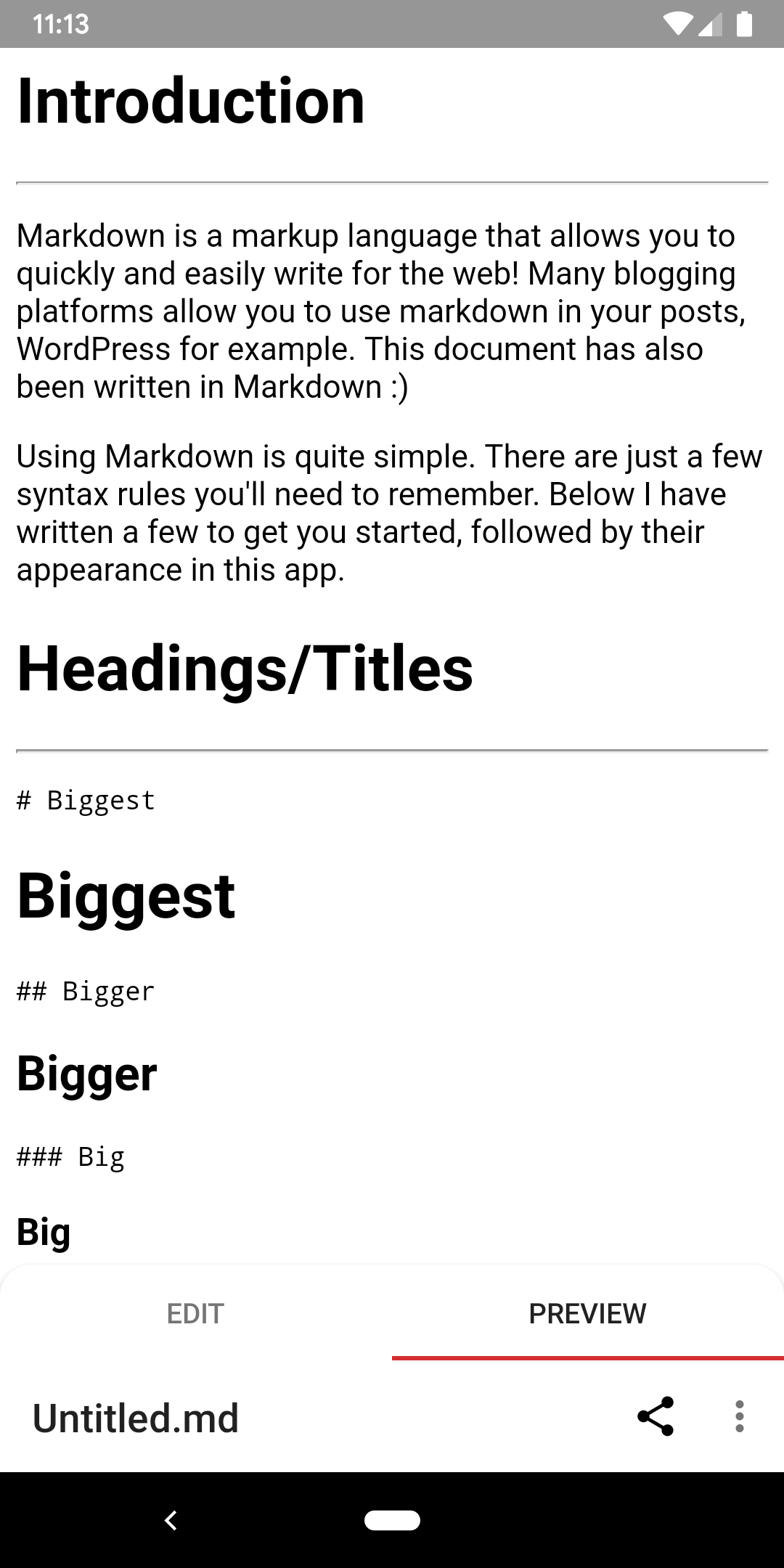 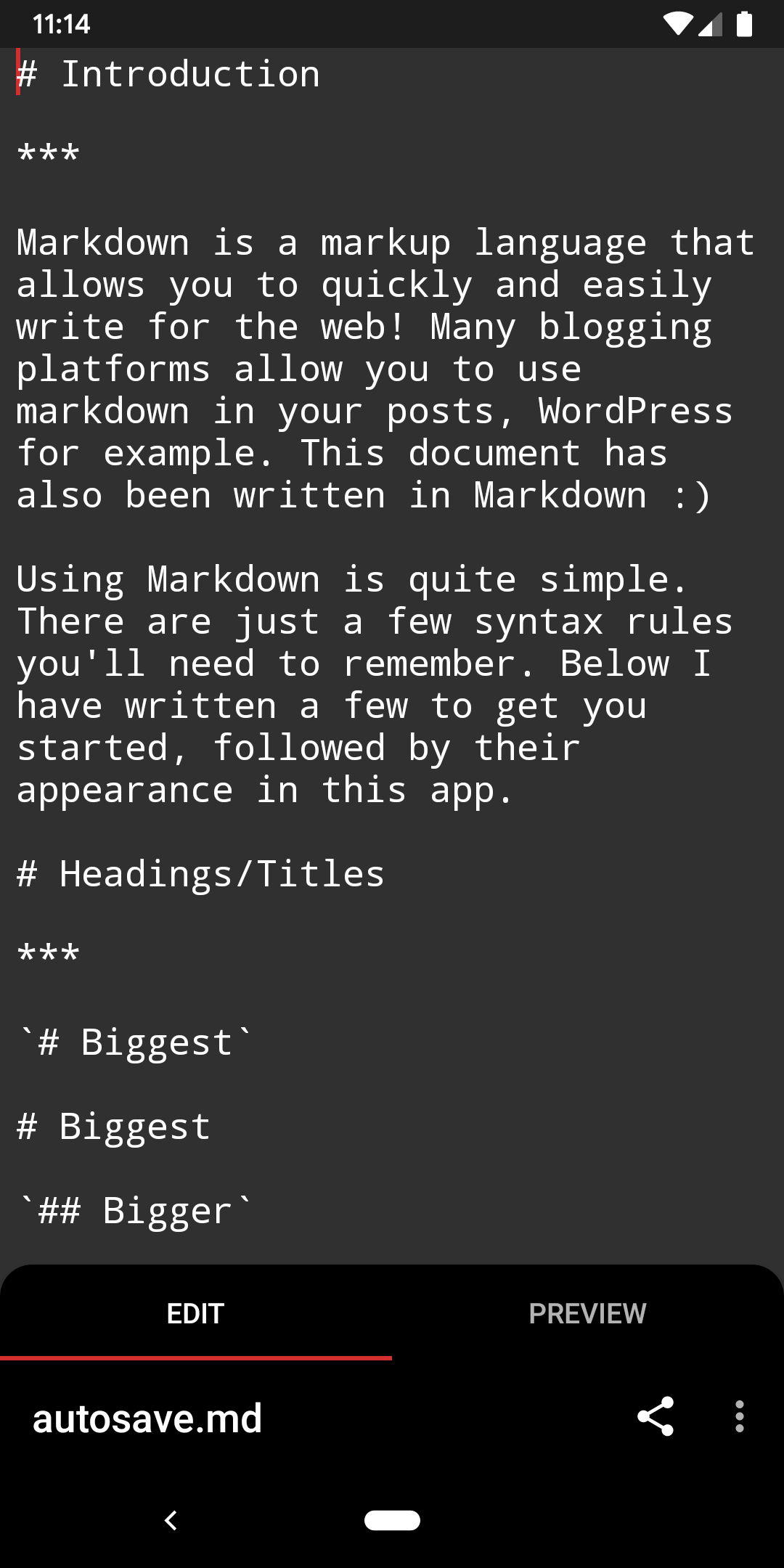 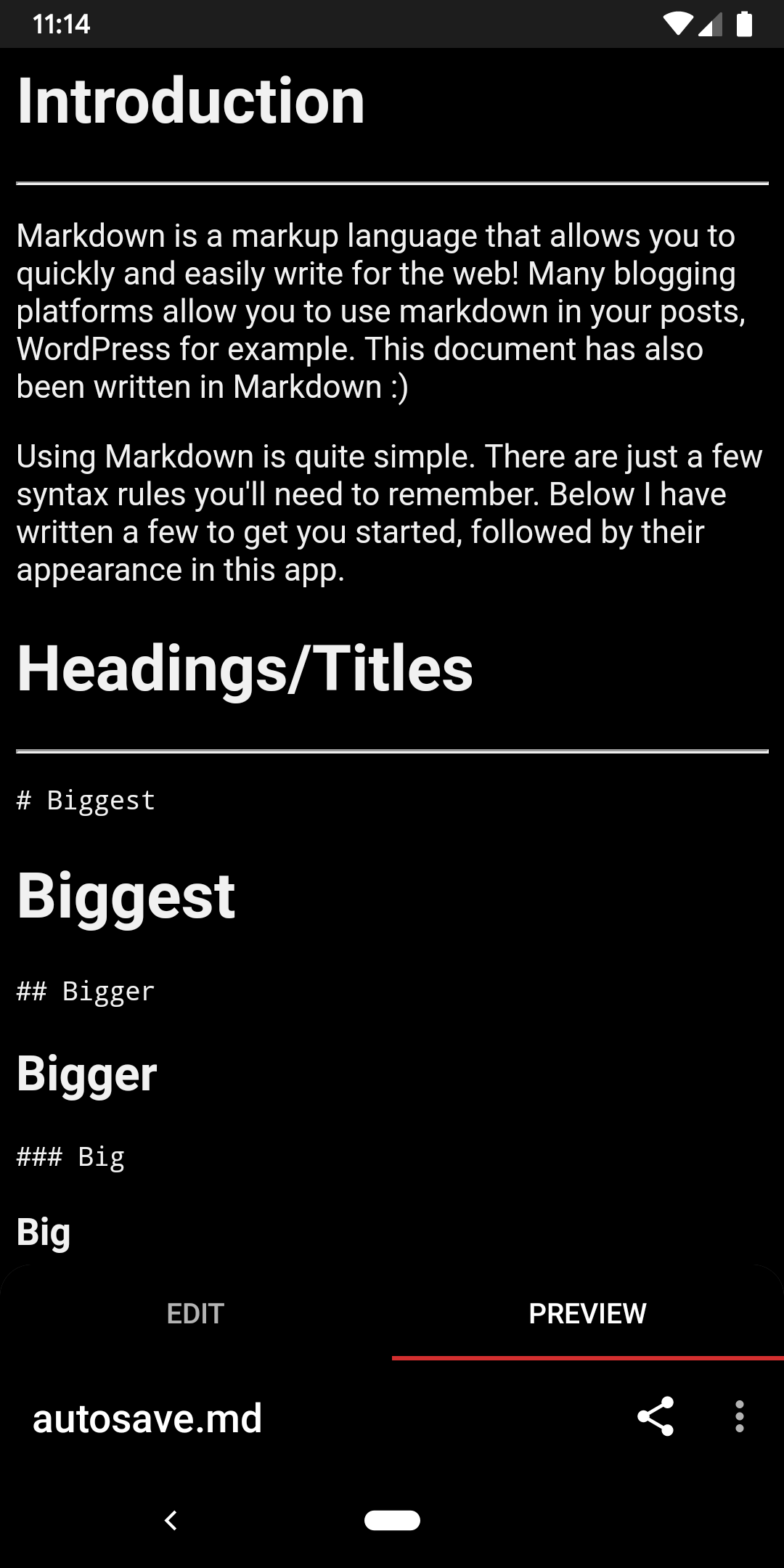